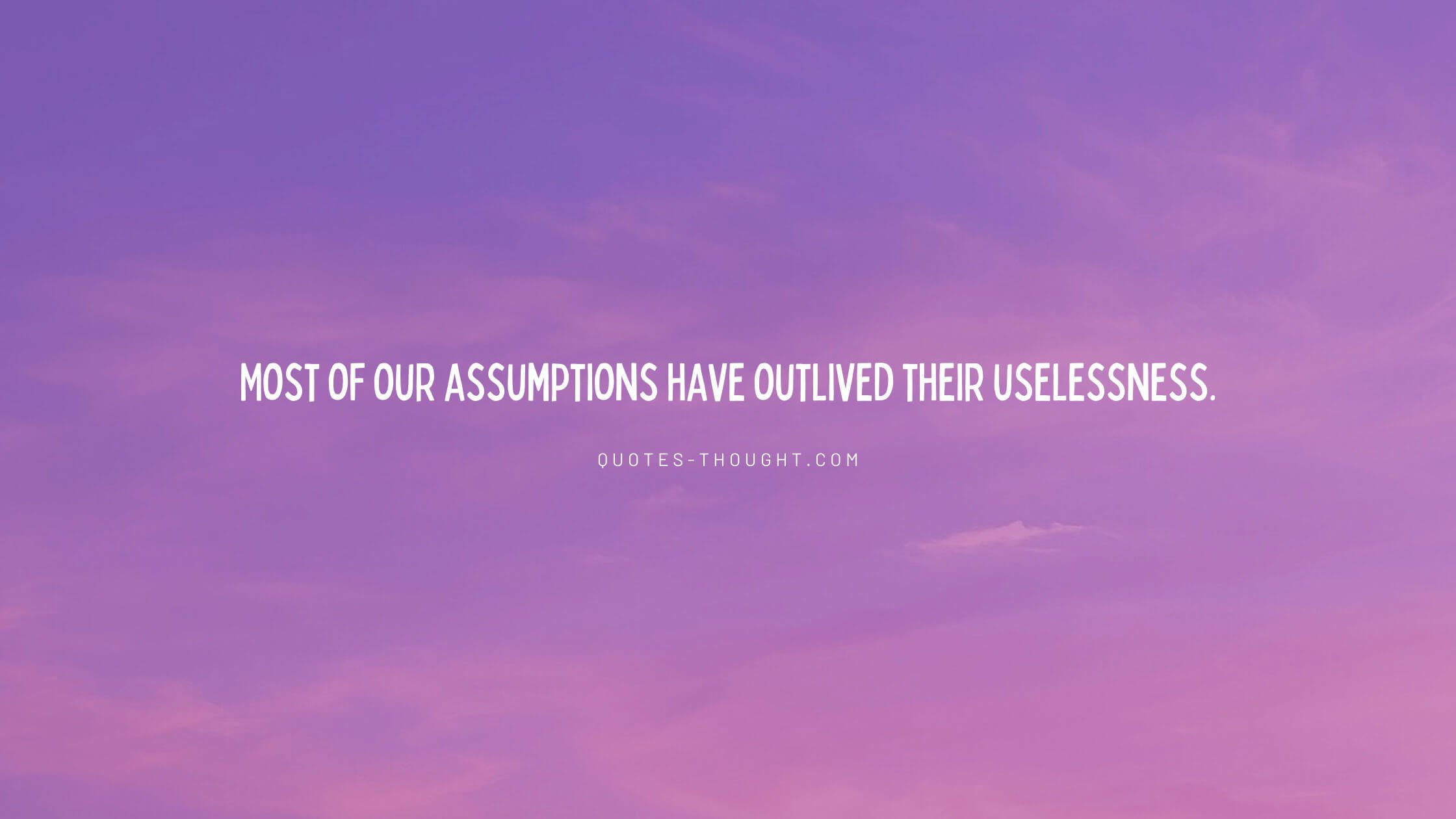 Read famous Assumption quotes and sayings from well-known authors. Share motivational and inspirational quotes about Assumption. Life is so full of disturbances that sometimes we tend to take things for granted. When you express yourself truthfully and openly, you’ll never need to make false assumptions. Eventually, the day you quit making incorrect assumptions, you’ll communicate clearly and cleanly and attain impeccable perfection with your speech. In this article, I’ll share the Best quotes about Assumptions. I hope you like it.

We cheerfully assume that in some mystic way, love conquers all, that good outweighs evil in the just balances of the universe. At the 11th hour, something gloriously triumphant will prevent the worst before it happens.
–JUSTIN BROOKS ATKINSON

We never look beyond our assumptions, and what’s worse, we have given up trying to meet others; we meet ourselves.
-Muriel Barbery

Most of our assumptions have outlived their uselessness.
-Marshall McLuhan

There is no vice so simple but assumes some mark of virtue on his outward parts.
-MARY BERTONE

Telling the future by looking at the past assumes that conditions remain constant. This is like driving a car by looking in the rearview mirror.
-HERB BRODY

All technology should be assumed guilty until proven innocent.
-DAVID ROSS BROWER

The creative individual has the capacity to free himself from the web of social pressures in which the rest of us are caught. He is capable of questioning the assumptions that the rest of us accept.
-JOHN WILLIAM GARDNER

The explanation requiring the fewest assumptions is most likely to be correct.

When you go to a party at somebody’s house, don’t automatically assume that the drinks are free. Ask, and ask often.
-JACK HANDEY

Education is a kind of continuing dialogue, and a dialogue assumes … different points of view.
-ROBERT MAYNARD HUTCHINS

The pure impulse of dynamic creation is formless and being formless, the creation it gives rise to can assume any and every form.
-KABBALAH

We have no right to assume that any physical laws exist, or if they have existed up until now, that they will continue to exist in a similar manner in the future.
-MAX KARL ERNST LUDWIG PLANCK

Spirituality is not adopting more beliefs and assumptions but uncovering the best in you.
-Amit Ray

Assumptions are dangerous things to make, and like all dangerous things to make — bombs, for instance, or strawberry shortcake — if you make even the tiniest mistake, you can find yourself in terrible trouble. Making assumptions means believing things are a certain way with little or no evidence that shows you are correct, and you can see at once how this can lead to terrible trouble. For instance, one morning, you might wake up and assume that your bed was in the same place that it always was, even though you would have no real evidence that this was so. But when you got out of your bed, you might discover that it had floated out to sea, and now you would be in terrible trouble all because of the incorrect assumption that you’d made. You can see that it is better not to make too many assumptions, particularly in the morning.
-Lemony Snicket